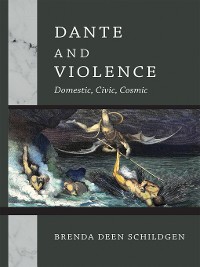 This study explores how Dante represents violence in the Comedy and reveals the connection between contemporary private and public violence and civic and canon law violations.

Although a number of articles have addressed particular aspects of violence in discreet parts of Dante's oeuvre, a systematic treatment of violence in the Commedia is lacking. This ambitious overview of violence in Dante's literary works and his world examines cases of violence in the domestic, communal, and cosmic spheres while taking into account medieval legal approaches to rights and human freedom that resonate with the economy of justice developed in the Commedia. Exploring medieval concerns with violence both in the home and in just war theory, as well as the Christian theology of the Incarnation and Redemption, Brenda Deen Schildgen examines violence in connection to the natural rights theory expounded by canon lawyers beginning in the twelfth century. Partially due to the increased attention to its Greco-Roman cultural legacy, the twelfth-century Renaissance produced a number of startling intellectual developments, including the emergence of codified canon law and a renewed interest in civil law based on Justinian's sixth-century Corpus juris civilis. Schildgen argues that, in addition to his "divine justice," Dante explores how the human system of justice, as exemplified in both canon and civil law and based on natural law and legal concepts of human freedom, was consistently violated in the society of his era. At the same time, the redemptive violence of the Crucifixion, understood by Dante as the free act of God in choosing the Incarnation and death on the cross, provides the model for self-sacrifice for the communal good. This study, primarily focused on Dante's representation of his contemporary reality, demonstrates that the punishments and rewards in Dante's heaven and hell, while ostensibly a staging of his vision of eternal justice, may in fact be a direct appeal to his readers to recognize the crimes that pervade their world. Dante and Violence will have a wide readership, including students and scholars of Dante, medieval culture, violence, and peace studies.