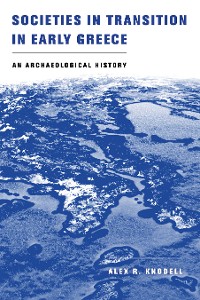 Societies in Transition in Early Greece

Situated at the disciplinary boundary between prehistory and history, this book presents a new synthesis of Late Bronze Age and Early Iron Age Greece, from the rise and fall of Mycenaean civilization, through the "Dark Age," and up to the emergence of city-states in the Archaic period. This period saw the growth and decline of varied political systems and the development of networks that would eventually expand to nearly all shores of the Middle Sea. Alex R. Knodell argues that in order to understand how ancient Greece changed over time, one must analyze how Greek societies constituted and reconstituted themselves across multiple scales, from the local to the regional to the Mediterranean. Knodell employs innovative network and spatial analyses to understand the regional diversity and connectivity that drove the growth of early Greek polities. As a groundbreaking study of landscape, interaction, and sociopolitical change, Societies in Transition in Early Greece systematically bridges the divide between the Mycenaean period and the Archaic Greek world to shed new light on an often-overlooked period of world history.