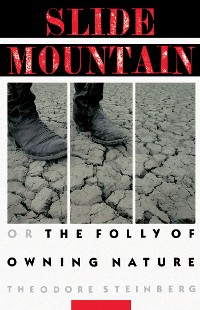 Or, The Folly of Owning Nature

The drive to own the natural world in twentieth-century America seems virtually limitless. Signs of this national penchant for possessing nature are everywhere—from suburban picket fences to elaborate schemes to own underground water, clouds, even the ocean floor.

Yet, as Theodore Steinberg demonstrates in this compelling, witty look at Americans' attempts to master the environment, nature continually turns these efforts into folly. In a rich, narrative style recalling the work of John McPhee, Steinberg tours America to explore some of the more unusual dilemmas that have arisen in our struggle to possess nature.

Beginning along the Missouri River, Steinberg recounts the battle for three thousand acres of land the river carved from a Nebraska Indian reservation and deposited in Iowa. Then he travels to Louisiana, where an army of lawyers butted heads over whether Six Mile Lake was actually a lake or a stream. He continues to Arizona to investigate who owned the underground, then to Pennsylvania's Blue Ridge Mountains to see who claimed the clouds. He ends in crowded New York City with Donald Trump's struggle for air rights.

Americans' obsession with owning nature was immortalized by Mark Twain in the tale of Slide Mountain, where a landslide-prone Nevada peak turned the American dream of real estate into dust. In relating these modern-day "Slide Mountain" stories, Steinberg illuminates what it means to live in a culture of property where everything must have an owner.