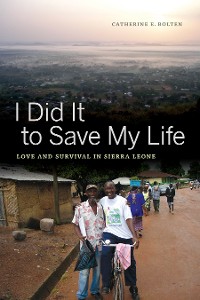 I Did It to Save My Life

Love and Survival in Sierra Leone

Utilizing narratives of seven different people—soldier, rebel, student, trader, evangelist, father, and politician— I Did it To Save My Life provides fresh insight into how ordinary Sierra Leoneans survived the war that devastated their country for a decade. Individuals in the town of Makeni narrate survival through the rubric of love, and by telling their stories and bringing memory into the present, create for themselves a powerful basis on which to reaffirm the rightness of their choices and orient themselves to a livable everyday. The book illuminates a social world based on love, a deep, compassionate relationship based on material exchange and nurturing, that transcends romance and binds people together across space and through time. In situating their wartime lives firmly in this social world, they call into question the government’s own narrative that Makeni residents openly collaborated with the rebel RUF during its three-year occupation of the town. Residents argue instead that it was the government’s disloyalty to its people, rather than rebel invasion and occupation, which destroyed the town and forced uneasy co-existence between civilians and militants.