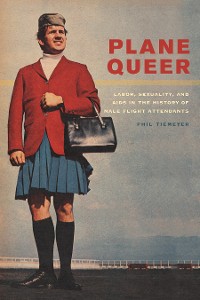 Labor, Sexuality, and AIDS in the History of Male Flight Attendants

In this vibrant new history, Phil Tiemeyer details the history of men working as flight attendants. Beginning with the founding of the profession in the late 1920s and continuing into the post-September 11 era, Plane Queer examines the history of men who joined workplaces customarily identified as female-oriented. It examines the various hardships these men faced at work, paying particular attention to the conflation of gender-based, sexuality-based, and AIDS-based discrimination. Tiemeyer also examines how this heavily gay-identified group of workers created an important place for gay men to come out, garner acceptance from their fellow workers, fight homophobia and AIDS phobia, and advocate for LGBT civil rights. All the while, male flight attendants facilitated key breakthroughs in gender-based civil rights law, including an important expansion of the ways that Title VII of the 1964 Civil Rights Act would protect workers from sex discrimination. Throughout their history, men working as flight attendants helped evolve an industry often identified with American adventuring, technological innovation, and economic power into a queer space.