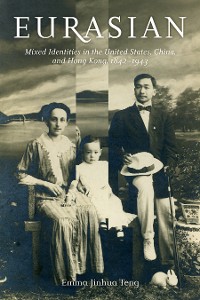 In the second half of the nineteenth century, global labor migration, trade, and overseas study brought China and the United States into close contact, leading to new cross-cultural encounters that brought mixed-race families into being. Yet the stories of these families remain largely unknown. How did interracial families negotiate their identities within these societies when mixed-race marriage was taboo and "Eurasian" often a derisive term?

In Eurasian, Emma Jinhua Teng compares Chinese-Western mixed-race families in the United States, China, and Hong Kong, examining both the range of ideas that shaped the formation of Eurasian identities in these diverse contexts and the claims set forth by individual Eurasians concerning their own identities. Teng argues that Eurasians were not universally marginalized during this era, as is often asserted. Rather, Eurasians often found themselves facing contradictions between exclusionary and inclusive ideologies of race and nationality, and between overt racism and more subtle forms of prejudice that were counterbalanced by partial acceptance and privilege.

By tracing the stories of mixed and transnational families during an earlier era of globalization, Eurasian also demonstrates to students, faculty, scholars, and researchers how changes in interracial ideology have allowed the descendants of some of these families to reclaim their dual heritage with pride.