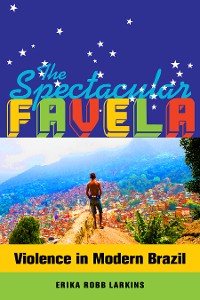 In Rio de Janeiro’s favelas, traffickers assert power through conspicuous displays of wealth and force, brandishing high-powered guns, gold jewelry, and piles of cash and narcotics. Police, for their part, conduct raids reminiscent of action films or video games, wearing masks and riding in enormous armored cars called "big skulls." Images of these spectacles circulate constantly in local, national, and global media, masking everyday forms of violence, prejudice, and inequality. The Spectacular Favela offers a rich ethnographic examination of the political economy of spectacular violence in Rocinha, Rio’s largest favela. Based on more than two years of residence in the community, the book explores how entangled forms of violence shape everyday life and how that violence is, in turn, connected to the market economy.

Erika Robb Larkins shows how favela violence is produced as a marketable global brand. While this violence is projected in disembodied form through media, the favela is also sold as an embodied experience through the popular practice of favela tourism. The commodification of the favela becomes a form of violence itself; favela violence is transformed into a commercially viable byproduct of a profit-driven war on drugs, which serves to keep the poor marginalized. This book tells the story of how traffickers, police, cameras, tourists, and even anthropologists come together to create what the author calls the "spectacular favela."