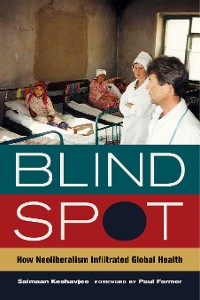 Neoliberalism has been the defining paradigm in global health since the latter part of the twentieth century. What started as an untested and unproven theory that the creation of unfettered markets would give rise to political democracy led to policies that promoted the belief that private markets were the optimal agents for the distribution of social goods, including health care.

A vivid illustration of the infiltration of neoliberal ideology into the design and implementation of development programs, this case study, set in post-Soviet Tajikistan’s remote eastern province of Badakhshan, draws on extensive ethnographic and historical material to examine a "revolving drug fund" program—used by numerous nongovernmental organizations globally to address shortages of high-quality pharmaceuticals in poor communities. Provocative, rigorous, and accessible, Blind Spot offers a cautionary tale about the forces driving decision making in health and development policy today, illustrating how the privatization of health care can have catastrophic outcomes for some of the world’s most vulnerable populations.