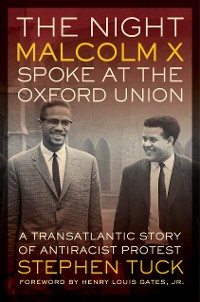 The Night Malcolm X Spoke at the Oxford Union

A Transatlantic Story of Antiracist Protest

Less than three months before he was assassinated, Malcolm X spoke at the Oxford Union—the most prestigious student debating organization in the United Kingdom. The Oxford Union regularly welcomed heads of state and stars of screen and served as the training ground for the politically ambitious offspring of Britain’s "better classes." Malcolm X, by contrast, was the global icon of race militancy. For many, he personified revolution and danger. Marking the fiftieth anniversary of the debate, this book brings to life the dramatic events surrounding the visit, showing why Oxford invited Malcolm X, why he accepted, and the effect of the visit on Malcolm X and British students.

Stephen Tuck tells the human story behind the debate and also uses it as a starting point to discuss larger issues of Black Power, the end of empire, British race relations, immigration, and student rights. Coinciding with a student-led campaign against segregated housing, the visit enabled Malcolm X to make connections with radical students from the Caribbean, Africa, and South Asia, giving him a new perspective on the global struggle for racial equality, and in turn, radicalizing a new generation of British activists. Masterfully tracing the reverberations on both sides of the Atlantic, Tuck chronicles how the personal transformation of the dynamic American leader played out on the international stage.