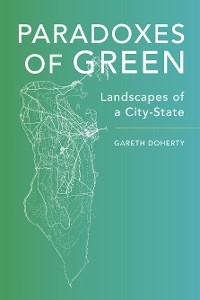 Landscapes of a City-State

This innovative multidisciplinary study considers the concept of green from multiple perspectives—aesthetic, architectural, environmental, political, and social—in the Kingdom of Bahrain, where green has a long and deep history of appearing cooling, productive, and prosperous—a radical contrast to the hot and hostile desert. Although green is often celebrated in cities as a counter to gray urban environments, green has not always been good for cities. Similarly, manifestation of the color green in arid urban environments is often in direct conflict with the practice of green from an environmental point of view. This paradox is at the heart of the book. In arid environments such as Bahrain, the contradiction becomes extreme and even unsustainable.

Based on long-term ethnographic fieldwork, Gareth Doherty explores the landscapes of Bahrain, where green represents a plethora of implicit human values and exists in dialectical tension with other culturally and environmentally significant colors and hues. Explicit in his book is the argument that concepts of color and object are mutually defining and thus a discussion about green becomes a discussion about the creation of space and place.