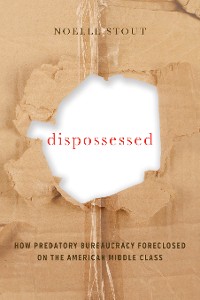 How Predatory Bureaucracy Foreclosed on the American Middle Class

In the aftermath of the 2008 financial crisis, more than 14 million U.S. homeowners filed for foreclosure. Focusing on the hard-hit Sacramento Valley, Noelle Stout uncovers the predacious bureaucracy that organized the largest bank seizure of residential homes in U.S. history. Stout reveals the failure of Wall Street banks’ mortgage assistance programs—backed by over $300 billion of federal funds—to deliver on the promise of relief. Unlike the programs of the Great Depression, in which the government took on the toxic mortgage debt of Americans, corporate lenders and loan servicers ultimately denied over 70 percent of homeowner applications. In the voices of bank employees and homeowners, Stout unveils how call center representatives felt about denying appeals and shares the fears of families living on the brink of eviction. Stout discloses the impacts of rising inequality on homeowners—from whites who felt their middle-class life unraveling to communities of color who experienced a more precipitous and dire decline. Trapped in a Kafkaesque maze of mortgage assistance, borrowers began to view debt refusal as a moral response to lenders, as seemingly mundane bureaucratic dramas came to redefine the meaning of debt and dispossession.