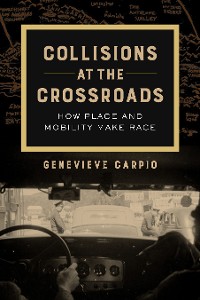 Collisions at the Crossroads

How Place and Mobility Make Race

There are few places where mobility has shaped identity as widely as the American West, but some locations and populations sit at its major crossroads, maintaining control over place and mobility, labor and race. In  Collisions at the Crossroads, Genevieve Carpio  argues that mobility, both permission to move freely and prohibitions on movement, helped shape racial formation in the eastern suburbs of Los Angeles and the Inland Empire throughout the nineteenth and twentieth centuries. By examining policies and forces as different as historical societies, Indian boarding schools, bicycle ordinances, immigration policy, incarceration, traffic checkpoints, and Route 66 heritage, she shows how local authorities constructed a racial hierarchy by allowing some people to move freely while placing limits on the mobility of others. Highlighting the ways people of color have negotiated their place within these systems, Carpio reveals a compelling and perceptive analysis of spatial mobility through physical movement and residence.