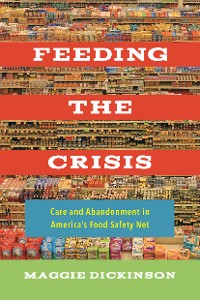 The Supplemental Nutrition Assistance Program (SNAP), formerly known as food stamps, is one of the most controversial forms of social welfare in the United States. Although it’s commonly believed that such federal programs have been cut back since the 1980s, Maggie Dickinson charts the dramatic expansion and reformulation of the food safety net in the twenty-first century. Today, receiving SNAP benefits is often tied to work requirements, which essentially subsidizes low-wage jobs. Excluded populations—such as the unemployed, informally employed workers, and undocumented immigrants—must rely on charity to survive.

Feeding the Crisis tells the story of eight families as they navigate the terrain of an expanding network of assistance programs in which care and abandonment work hand in hand to make access to food uncertain for people on the social and economic margins. Amid calls at the federal level to expand work requirements for food assistance, Dickinson shows us how such ideas are bad policy that fail to adequately address hunger in America. Feeding the Crisis brings the voices of food-insecure families into national debates about welfare policy, offering fresh insights into how we can establish a right to food in the United States.