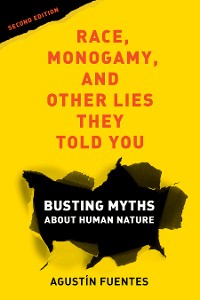 Race, Monogamy, and Other Lies They Told You, Second Edition

A compelling takedown of prevailing myths about human behavior, updated and expanded to meet the current moment.

There are three major myths of human nature: humans are divided into biological races; humans are naturally aggressive; and men and women are wholly different in behavior, desires, and wiring. Race, Monogamy, and Other Lies They Told You counters these pervasive and pernicious myths about human behavior. Agustín Fuentes tackles misconceptions about what race, aggression, and sex really mean for humans, and incorporates an accessible understanding of culture, genetics, and evolution that requires us to dispose of notions of "nature or nurture."

Presenting scientific evidence from diverse fields, including anthropology, biology, and psychology, Fuentes devises a myth-busting toolkit to dismantle persistent fallacies about the validity of biological races, the innateness of aggression and violence, and the nature of monogamy, sex, and gender. This revised and expanded edition  provides up-to-date references, data, and analyses, and addresses new topics, including the popularity of home DNA testing kits and the lies behind ‘"incel" culture; the resurgence of racist, nativist thinking and the internet's influence in promoting bad science; and a broader understanding of the diversity of sex and gender.