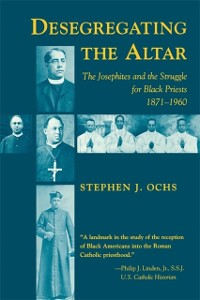 The Josephites and the Struggle for Black Priests, 1871-1960

Historically, black Americans have affiliated in far greater numbers with certain protestant denominations than with the Roman Catholic church. In analyzing this phenomenon scholars have sometimes alluded to the dearth of black Catholic priest, but non one has adequately explained why the church failed to ordain significant numbers of black clergy until the 1930s. Desegregating the Altar, a broadly based study encompassing Afro-American, Roman catholic, southern, and institutional history, fills that gap by examining the issue through the experience of St. Joseph's Society of the Sacred Heart, or the Josephites, the only American community of Catholic priests devoted exclusively to evangelization of blacks.Drawing on extensive research in the previously closed or unavailable archives of numerous archdioceses, diocese, and religious communities, Stephen J. Ochs shows that, in many cases, Roman catholic authorities purposely excluded Afro-Americans from their seminaries. The conscious pattern of discrimination on the part of numerous bishops and heads of religious institutes stemmed from a number of factors, including the church's weak and vulnerable position in the South and the consequent reluctance of its leaders to challenge local racial norms; the tendency of Roman Catholics to accommodate to the regional and national cultures in which they lived; deep-seated psychosexual fears that black men would be unable to maintain celibacy as priests; and a &quotemissionary approach&quote to blacks that regarded them as passive children rather than as potential partners and leaders.The Josephites, under the leadership of John R. Slattery, their first superior general (1893-1903), defied prevailing racist sentiment by admitting blacks into their college and seminary and raising three of them to the priesthood between 1891 and 1907. This action proved so explosive, however, that it helped drive Slattery out of the church and nearly destroyed the Josephite community. In the face of such opposition, Josephite authorities closed their college and seminary to black candidates except for an occasional mulatto. Leadership in the development of a black clergy thereupon passed to missionaries of the Society of the Diving Word. Meanwhile, Afro-American Catholics, led by Professor Thomas Wyatt, refused to allow the Josephites to abandon the filed quietly. They formed the Federated Colored Catholics of America and pressed the Josephites to return to their earlier policies; they also communicated their grievances to the Holy See, which, in turn, quietly pressured the American church to open its seminaries to black candidates. As a result, by 1960, the number of black priests and seminarians in the Josephites and throughout the Catholic church in the United States had increased significantly.Stephen Ochs's study of the Josephites illustrates the tenacity and insidiousness of institutional racism and the tendency of churches to opt for institutional security rather than a prophetic stance in the face of controversial social issues. His book ably demonstrates that the struggle of black Catholics for priests of their own race mirrored the efforts of Afro-Americans throughout American society to achieve racial equality and justice. 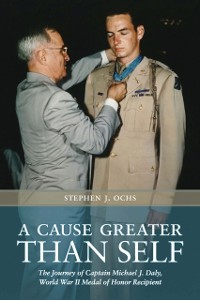 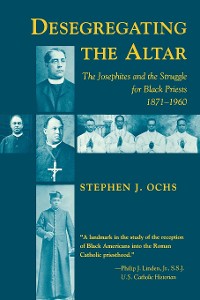