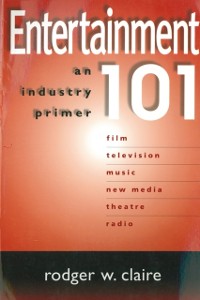 Entertainment 101 provides an overview of the rapidly changing entertainment industry: Who does what, how, when and why in the making and marketing of Americas most influential and profitable export. A street-smart primer, this book demystifies and explains the terminology and inner workings of the entire industry, covering motion pictures, television, theatre, music and new media. This up-to-the-minute manual is an essential desktop reference for students and entertainment business veterans alike, or indeed anyone fascinated by an industry that intrigues most of us and has a profound effect on our society. To simplify things, we have divided the far-flung and variegated entertainment industry into its six principle businesses: film, television, music, new media, theater and radio. To help understand how a project is actually created and to identify the players in each medium, we have listed the typical cast and crew credits from a film, a television show, a record album, a stage play, an on-line magazine and a radio show. We have described in detail the jobs of each artist and artisan and what they contribute.