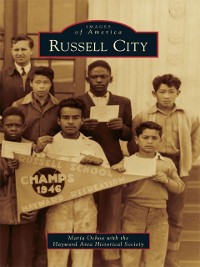 Between 1853 and 1964, on the western shore of what is now the city of Hayward, there existed a small rural community. This pictorial history traces the role that this region, which became known as Russell City, played in the development of the East Bay. Named for Joel Russell, a New England teacher who came to California during the Gold Rush and found success as a judge, political activist, and businessman, Russell City later became a destination point for diverse migrant and immigrant groups including Spaniards, Danes, Germans, Italians, African Americans, and Mexicans. While the economic means of the residents were never great, social riches abounded in the cultural and religious traditions that were practiced. A plan to create an industrial park on Russell City land emerged during the 1950s, and by 1964 the residents and businesses were entirely removed through eminent domain. An annual reunion picnic, begun in 1978, serves as a reminder of the community once built and then tossed to the winds. In the words of the former residents, ,The city may be gone, but the memories live on.,