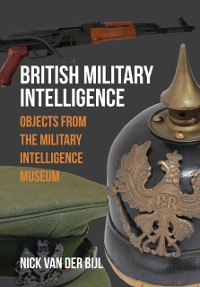 Objects from the Military Intelligence Museum

Through a mix of objects, medals, photographs and documents held in the Military Intelligence Museum, the book tells the story of British military intelligence across the years, moving from its earliest object of the Waterloo medal awarded to the Duke of Wellington's senior intelligence officer to items recovered from operations in Afghanistan. This fascinating collection includes a Boer War photographic stereoscope and uniforms worn by intelligence officers and other ranks during the First World War. Among the Second World War objects are a very rare highest gallantry medal awarded to a British officer by France, items that belonged to a founder of the Long Range Desert Group, an example of a pigeon coop used to deliver pigeons in Occupied Europe, a chess set used by captured Special Operations Executive operatives in Buchenwald concentration camp and copies of forged rations coupons dropped into Germany as part of Psychological Warfare Executive operations. The end of the war saw the Intelligence Corps heavily involved in arresting war criminals in Germany and Japan; among the objects are handcuffs used by a Field Security Section in Occupied Germany to arrest three high-ranking Nazi officials. During the Cold War, the Intelligence Corps role in collecting intelligence from those organisations hostile to British interests and protecting the Army from espionage, sabotage and terrorism is illustrated by several documents. The varied nature of these objects illuminates a feature of British military operations that is rarely discussed, despite having been frequently proven to be crucial to their success. Knowledge Gives Strength to the Arm - the Intelligence Corps motto.