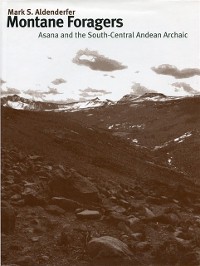 Asana and the South-Central Andean Archaic

All previous books dealing with prehistoric hunter-gatherers in the high Andes have treated ancient mountain populations from a troglodyte's perspective, as if they were little different from lowlanders who happened to occupy jagged terrain. Early mountain populations have been transformed into generic foragers because the basic nature of high-altitude stress and biological adaptation has not been addressed. In Montane Foragers, Mark Aldenderfer builds a unique and penetrating model of montane foraging that justly shatters this traditional approach to ancient mountain populations.Aldenderfer's investigation forms a methodological and theoretical tour de force that elucidates elevational stress-what it takes for humans to adjust and survive at high altitudes. In a masterful integration of mountain biology and ecology, he emphasizes the nature of hunter-gatherer adaptations to high-mountain environments. He carefully documents the cultural history of Asana, the first stratified, open-air site discovered in the highlands of the south-central Andes. He establishes a number of major occurrences at this revolutionary site, including the origins of plant and animal domestication and transitions to food production, the growth and packing of forager populations, and the advent of some form of complexity and social hierarchy.The rich and diversified archaeological record recovered at Asana-which spans from 10,000 to 3,500 years ago-includes the earliest houses as well as public and ceremonial buildings in the central cordillera. Built, used, and abandoned over many millennia, the Asana structures completely transform our understanding of the antiquity and development of native American architecture. Aldenderfer's detailed archaeological case study of high-elevation foraging adaptation, his description of this extreme environment as a viable human habitat, and his theoretical model of montane foraging create a new understanding of the lifeways of foraging peoples worldwide.