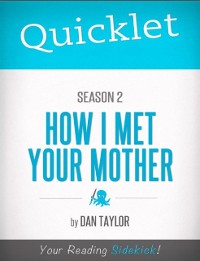 Quicklet on How I Met Your Mother Season 2

ABOUT THE BOOK When the second season of How I Met Your Mother premiered in September 2006, fans were waiting to find out what came next after a big cliffhanger at the end of the series' successful first season. The series was building momentum after introducing the world to a unique sitcom approach: Ted Mosby (voiced by Bob Saget) in the year 2030 narrates the series as he tells his kids about the events that led up to him meeting their mother; each event takes the form of an episode. A few critics have compared the show favorably to Friends and The Wonder Years, describing it as a modern take on a sitcom based on flashbacks and a group of friends living in New York. MEET THE AUTHOR Dan P. Taylor is a writer, editor and journalist with more than eight years of professional experience. He is currently managing editor of a weekly publication in the Washington, D.C.-area that covers the world of the Pentagon and Capitol Hill, and he also writes articles for various magazines. Dan has a passion for writing on a variety of topics and puts a high level of research into every piece he writes. You can learn more about him -- as well as view sample work -- at his website: www.danptaylor.com. You can also follow him on Twitter via his handle: @DanPTaylor1. EXCERPT FROM THE BOOK Marshall and Lily's relationship and wedding: This is perhaps the fulcrum of the entire season, as it begins with Marshall heartbroken over Lily's departure to San Francisco and ends with their wedding. Much of the season revolves around this relationship, starting with some of the early episodes as Barney and Ted try to get his mind off Lily so that he can move on with his life. The drama continues when Lily returns, but Marshall isn't ready to just jump right back into the relationship. As a result, there's a back-and-forth that develops that is somewhat similar to the relationship between Ted and Robin. Eventually, however, the two settle down with each other. The remainder of the season revolves around the planning of their wedding. The relationship between Ted and Robin: Ted and Robin once again restart their relationship after things ended in Season 1. The two actually remain committed to each other until the very end of the second season, when they decide to go their own separate ways. Although they continue to have feelings for each other, it doesn't appear to be the right time in their lives for them to be together. Future Ted even goes as far as to say explicitly that Robin is not &quoteThe One.&quote CHAPTER OUTLINEQuicklet on How I Met Your Mother Season 2+ About How I Met Your Mother Season 2+ About Producer and Director Pamela Fryman+ Synopsis of How I Met Your Mother Season 2+ Episodes 1-4: Marshall Moves On, Ted Hearts Robin+ ...and much moreHow I Met Your Mother Season 2