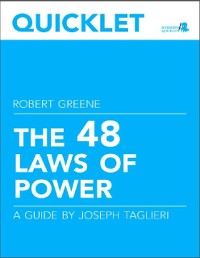 DescriptionABOUT THE BOOKWhether you seek to gain, observe, or protect yourself from domination by the forces of power in the world, Robert Greene's comprehensive tome on this intriguing subject is in many ways a groundbreaking work of literature. The 48 Laws of Power synthesizes the thoughts of a host of history's most influential thinkers including Machiavelli, Sun-tzu, Carl von Clausewitz and others. Not only is it rich in the history of power politics and warfare spanning three millennia, the book has real-life relevance to those contending with the affect on our lives in modern times. Greene's 48 laws demonstrate how qualities such as prudence, cunning, stealth and subtlety, and a complete lack of mercy or compassion for one's enemies come into play with humanity's power dynamic.It's apparent that those who feel powerless in today's globalized economy driven by the politics of big-money capitalism are a target audience of this book. The preface begins: &quoteThe feeling of having no power over people and events is generally unbearable to us-when we feel helpless we feel miserable.&quote Very much like the social and political pressures contained within an old royal court, a duplicitous game of non-overt power moves is the key to success in the current power paradigm.