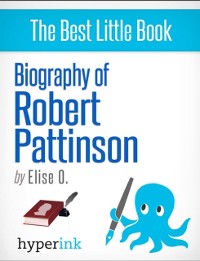 ABOUT THE BOOK With his thick mane of unruly hair and his charming English accent, Robert Pattinson has made a name for himself as a sexy Hollywood star. Pattinson has starred in a number of movies to date, but the role of Edward Cullen in the Twilight Saga movies has made him an international celebrity. Before Pattinson transformed himself into the leading vampire inspired by Stephanie Meyer's books, he was known as a minor character in the Harry Potter movie franchise. Now, wherever he goes and whatever role he steps into, Robert Pattinson is instantly recognized as the industry's hottest vampire. Rarely do actors land roles as meaty as Twilight's vampire Edward Cullen. When Pattinson brought the brooding character to life, he made women across the world weak in the knees. Cullen's sparkling skin, vegetarianism and deep gazes made Pattinson an instant star in 2008. Since the original Twilight movie, four sequels have been filmed. Each new movie has earned hundreds of millions of dollars. It is estimated that the franchise is worth over one billion dollars. EXCERPT FROM THE BOOK Robert Douglas Thomas Pattinson was born May 13, 1986, in London, England. His mother, Clare Pattinson, worked for a modeling agency. His father, Robert Pattinson, was the head of a car importing business. Robert has two older sisters, Lizzie Pattinson and Victoria Pattinson. While he was growing up in Barnes, one of London's suburbs, Robert enjoyed a variety of hobbies. He was quite a gifted athlete, and took part in such sports as soccer, skiing, snowboarding and skateboarding. Robert participated in local sports leagues at his school, Tower House School. Robert's sister Lizzie was a budding musician, and for a long time Robert wished to follow her path. Lizzie had three hit singles in the UK from her groups Aurora and Milk & Sugar. Robert learned how to play the guitar and the keyboards, and in his spare time he practiced his songwriting skills. Robert's mother, however, had different plans for him. At a young age, Clare encouraged her son to try out modeling. Robert modeled for about four years, beginning when he was twelve years old. Because he was tall, thin and androgynous, his look proved quite popular for a short period of time. As soon as he began to look more masculine, though, his modeling career fizzled out. Pattinson recalls, &quoteWhen I first started I was quite tall and looked like a girl, so I got lots of jobs, because it was during that period where the androgynous look was cool. Then, I guess, I became too much of a guy, so I never got any more jobs. I had the most unsuccessful modeling career.&quote Buy a copy to keep reading!CHAPTER OUTLINEBiography of Robert Pattinson+ Introduction+ Background+ Major Achievements+ Personal Life+ ...and much more