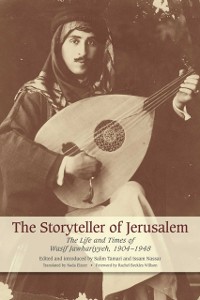 The memoirs of Wasif Jawhariyyeh are a remarkable treasure trove of writings on the life, culture, music, and history of Jerusalem. Spanning over four decades, from 1904 to 1948, they cover a period of enormous and turbulent change in Jerusalem's history, but change lived and recalled from the daily vantage point of the street storyteller. Oud player, music lover and ethnographer, poet, collector, partygoer, satirist, civil servant, local historian, devoted son, husband, father, and person of faith, Wasif viewed the life of his city through multiple roles and lenses. The result is a vibrant, unpredictable, sprawling collection of anecdotes, observations, and yearnings as varied as the city itself. Reflecting the times of Ottoman rule, the British mandate, and the run-up to the founding of the state of Israel, The Storyteller of Jerusalem offers intimate glimpses of people and events, and of forces promoting confined, divisive ethnic and sectarian identities. Yet, through his passionate immersion in the life of the city, Wasif reveals the communitarian ethos that runs so powerfully through Jerusalem's past. And that offers perhaps the best hope for its future.