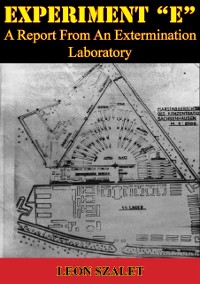 EXPERIMENT &quote;E&quote; - A Report From An Extermination Laboratory

One of the earliest published accounts of the Nazi concentration camp system, for no crime other than being Jewish Leon Szalet was incarcerated by the Gestapo and experienced the awful torments of Sachsenhausen.&quoteLong before I became acquainted with a German concentration camp-at the time Germany launched her attack on Poland-I had heard much about the horrors of these German torture chambers. Almost everyone who lived in Germany, native or foreigner, knew of someone who had once been in a concentration camp. Everyone had a vague idea of the punishment cells, whippings, starvation rations. But just how the mechanism of a concentration camp functioned, how a prisoner's day was spent, how he worked, what he ate, what and how he suffered-these things were known only to those who had once been cogs in such a mechanism.And these did not speak. They did not speak because the fear of the Gestapo haunted them night and day; because on their release from the camp they were made to sign a statement that they would not make public the things they had seen and experienced; because the Gestapo sent those who broke this pledge back to the camp for &quoteatrocity propaganda&quote; and because those sent back would soon come out again, this time in a crudely built wooden coffin.It was a long while before I felt strong enough to describe what I had seen and experienced. That I have been able to put it on paper at all, I owe to my daughter, whose untiring energy and resourcefulness not only accomplished my rescue but has also been an invaluable help in preparing the manuscript.&quote-Author's Preface.