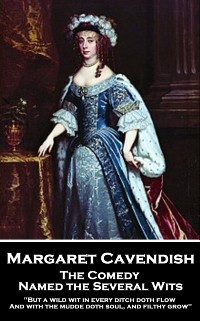 'But a wild wit in every ditch doth flow, And with the mudde doth soul, and filthy grow''

Margaret Lucas Cavendish, Duchess of Newcastle-upon-Tyne was born in 1623 in Colchester, Essex into a family of comfortable means.From an early age Margaret was already assembling her thoughts for future works despite the then conditions of society that women did not partake in public authorship. For England it was also a time of Civil War.Despite these obvious dangers, Margaret asked her mother for permission to become one of her Ladies-in-waiting. She was accepted and, in 1644, accompanied the Queen into exile in France. This took her away from her family for the first time.Despite living at the Court of the young King Louis XIV, life for the young Margaret was not what she expected. She was far from her home and her confidence had been replaced by shyness and difficulties fitting in to the grandeur of her surroundings and the eminence of her company.Margaret told her mother she wanted to leave the Court. Her mother was adamant that she should stay. She provided additional funds for her to make life easier. It was now also that she met and married William Cavendish who, at the time, was the Marquis of Newcastle. He was also 30 years her senior and previously married with two children.As Royalists, a return to life in England was not yet possible. They would remain in exile in Paris, Rotterdam and Antwerp until the restoration of the crown in 1660 although Margaret was able to return for attention to some estate matters.Along with her husband's brother, she travelled to England after having been told that her husband's estate was to be sold and that she, as his wife, would receive some benefit of the sale. She received nothing. She left England to be with her husband again.The couple were devoted to each other. Margaret wrote that he was the only man she was ever in love with, loving him not for title, wealth or power, but for merit, justice, gratitude, duty, and fidelity. She also relied upon him for support in her career. The marriage provided no children despite efforts made by her physician to overcome her inability to conceive.Margaret's first book, 'Poems and Fancies', was published in 1653; it was a collection of poems, epistles and prose pieces which explores her philosophical, scientific and aesthetic ideas.For a woman at this time writing and publishing were avenues they had great difficulty in pursuing. She wrote across a number of issues including gender, power, manners, scientific method, and philosophy.She always claimed she had too much time on her hands and was therefore able to indulge her love of writing. As a playwright she produced many works although most are as closet dramas. (This is a play not intended to be performed onstage, but instead read by a solitary reader). For Margaret the rigours of exile, her gender and Cromwell's closing of the theatres mean this was her early vehicle of choice and, despite these handicaps, she became one of the most well-known playwrights in England)Her utopian romance, 'The Blazing World', is one of the earliest examples of science fiction. Margaret also published extensively in natural philosophy and early modern science; at least a dozen books.She was the first woman to attend a meeting at Royal Society of London in 1667 and she criticized and engaged with members and philosophers Thomas Hobbes, Rene Descartes, and Robert Boyle.Margaret was always defended against any criticism by her husband and he also contributed to some of her works. She also gives him credit as her writing tutor.Perhaps a little strangely she said her ambition despite her shyness, was to have everlasting fame. During her career, from the mid 1650's until her death, she was prolific. In recent decades her work has undergone a resurgence of interest propelled mainly by her ground-breaking attitude and accomplishments in those male straitened times.Margaret Cavendish died on 15th December 1673 and was buried at Westminster Abbey.