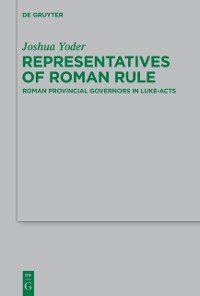 Luke-Acts contains a wealth of material that is relevant to politics, and the relationship between Jesus and his followers and the Roman Empire becomes an issue at a number of points. The author's fundamental attitude toward Rome is hard to discern, however. The complexity of Luke's task as both a creative writer and a mediator of received tradition, and perhaps as well the author's own ambivalence, have left conflicting evidence in the narrative. Scholarly treatments of the issue have tended to survey in a relatively short scope a great amount of material with different degrees of relevance to the question and representing different proportions of authorial contribution and traditional material. This book attempts to make a contribution to the discussion by narrowing the focus to Luke's depiction of the Roman provincial governors in his narrative, interpreted in terms of his Greco-Roman literary context. Luke's portraits of Roman governors can be seen to invoke expectations and concerns that were common in the literary context. By these standards Luke's portrait of these Roman authority figures is relatively critical, and demonstrates his preoccupation with Rome's judgment of the Christians more than a desire to commend Roman rule. 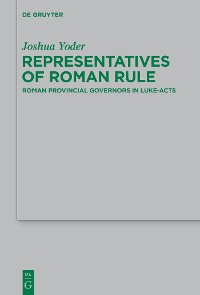