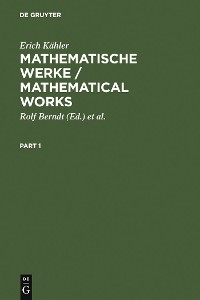 For most mathematicians and many mathematical physicists the name Erich Kähler is strongly tied to important geometric notions such as Kähler metrics, Kähler manifolds and Kähler groups. They all go back to a paper of 14 pages written in 1932. This, however, is just a small part of Kähler's many outstanding achievements which cover an unusually wide area: From celestial mechanics he got into complex function theory, differential equations, analytic and complex geometry with differential forms, and then into his main topic, i.e. arithmetic geometry where he constructed a system of notions which is a precursor and, in large parts, equivalent to the now used system of Grothendieck and Dieudonné. His principal interest was in finding the unity in the variety of mathematical themes and establishing thus mathematics as a universal language. In this volume Kähler's mathematical papers are collected following a "Tribute to Herrn Erich Kähler" by S. S. Chern, an overview of Kähler's life data by A. Bohm and R. Berndt, and a Survey of his Mathematical Work by the editors. There are also comments and reports on the developments of the main topics of Kähler's work, starting by W. Neumann's paper on the topology of hypersurface singularities, J.-P. Bourguignon's report on Kähler geometry and, among others by Berndt, Bost, Deitmar, Ekeland, Kunz and Krieg, up to A. Nicolai's essay "Supersymmetry, Kähler geometry and Beyond". As Kähler's interest went beyond the realm of mathematics and mathematical physics, any picture of his work would be incomplete without touching his work reaching into other regions. So a short appendix reproduces three of his articles concerning his vision of mathematics as a universal Theme together with an essay by K. Maurin giving an "Approach to the philosophy of Erich Kähler".

Jean Mawhin in: Bulletin of the Belgian Mathematical Society 4/2005
"This careful and well documented edition of the work of Erich Kähler is a most welcome addition to the mathematical literature."
Weitere Titel von diesem Autor
Weitere Titel zum gleichen Preis 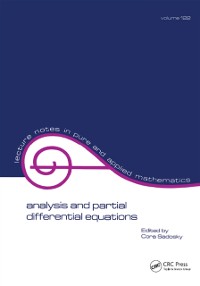