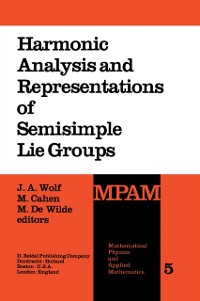 Lectures given at the NATO Advanced Study Institute on Representations of Lie Groups and Harmonic Analysis, held at Liege, Belgium, September 5-17, 1977

This book presents the text of the lectures which were given at the NATO Advanced Study Institute on Representations of Lie groups and Harmonic Analysis which was held in Liege from September 5 to September 17, 1977. The general aim of this Summer School was to give a coordinated intro- duction to the theory of representations of semisimple Lie groups and to non-commutative harmonic analysis on these groups, together with some glance at physical applications and at the related subject of random walks. As will appear to the reader, the order of the papers - which follows relatively closely the order of the lectures which were actually give- follows a logical pattern. The two first papers are introductory: the one by R. Blattner describes in a very progressive way a path going from standard Fourier analysis on IR&quote to non-commutative harmonic analysis on a locally compact group; the paper by J. Wolf describes the structure of semisimple Lie groups, the finite-dimensional representations of these groups and introduces basic facts about infinite-dimensional unitary representations. Two of the editors want to thank particularly these two lecturers who were very careful to pave the way for the later lectures. Both these chapters give also very useful guidelines to the relevant literature.