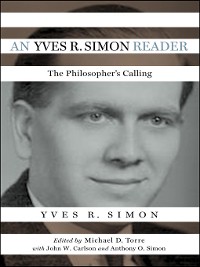 An Yves R. Simon Reader is the first collection of texts from the entirety of the philosopher's work.

French Catholic (and then American) political philosopher Yves R. Simon was a student of Jacques Maritain and one of the most important figures in the revival of Thomism. His work, however, is still little known in English, and there is as yet no English biography of him. In An Yves R. Simon Reader: The Philosopher's Calling, Michael D. Torre provides an erudite and helpful introduction to Simon's life and thought. The volume contains selected key texts from all of Simon's twenty books, half of which were published posthumously, dividing them into three sections. The first fundamentally defends the Aristotelian and Thomistic account of human knowing. The second begins with his groundbreaking discussion of human freedom and ends with his account of practical wisdom. The third then expands this account to cover the chief concerns of his social and political philosophy. The selections are long enough to be substantive and contain sustained and complete arguments. Each selection has its own foreword by an eminent commentator, familiar with Simon's work, who lays out the necessary context for the reader.

An Yves R. Simon Reader includes sections from several of Simon's last and most important essays: on sensitive knowledge and on the analogous nature of "act." It includes a number of excerpts from his justly famous account and defense of democratic government. The hallmarks of his work—his careful conceptual analysis, his genius for finding undervalued examples, and his talent for creating expressions that revivified an outworn idea—are on display throughout. Indeed, as one of the book's contributors says, Simon touched nothing that he did not adorn. The result is a highly readable introduction to the thought of a key and underappreciated modern philosopher. 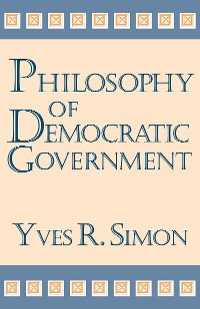 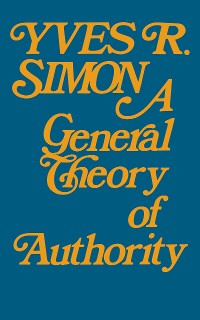