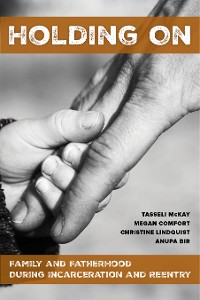 Family and Fatherhood during Incarceration and Reentry

Holding On reveals the results of an unprecedented ten-year study of justice-involved families, rendering visible the lives of a group of American families whose experiences are too often lost in large-scale demographic research. Using new data from the Multi-site Family Study on Incarceration, Parenting, and Partnering—a groundbreaking study of almost two thousand families, incorporating a series of couples-based surveys and qualitative interviews over the course of three years—Holding On sheds rich new light on the parenting and intimate relationships of justice-involved men, challenging long-standing boundaries between research on incarceration and on the well-being of low-income families. Boldly proposing that the failure to recognize the centrality of incarcerated men’s roles as fathers and partners has helped to justify a system that removes them from their families and hides that system’s costs to parents, partners, and children, Holding On considers how research that breaks the false dichotomy between offender and parent, inmate and partner, and victim and perpetrator might help to inform a next generation of public policies that truly support vulnerable families.